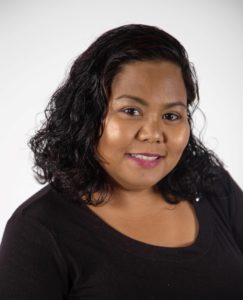 Joyce DeJesus is delighted to be performing with Black Kat Theatre. Recent credits include stage readings for Three Sisters and Anthropology, Nell in In Security and Edith Zuckerman in Charlotte’s Web The Musical.

This last year Joyce has focused her attention on directing, and has done two short plays and assisted directed an original play called Front Porch at Lamplighters Community Theatre. She has also recently focused on film and has a webseries coming out called A Bit Twisted in which she plays Emily. Joyce is excited to get back to acting on stage in an ensemble comedy that uses humor to further the political discussion she feels the country always needs. Joyce believes freedom of speech is a powerful right that we should use to continually evolve the thoughts of the general population so that everyone that lives here can live free to be the best they can be.